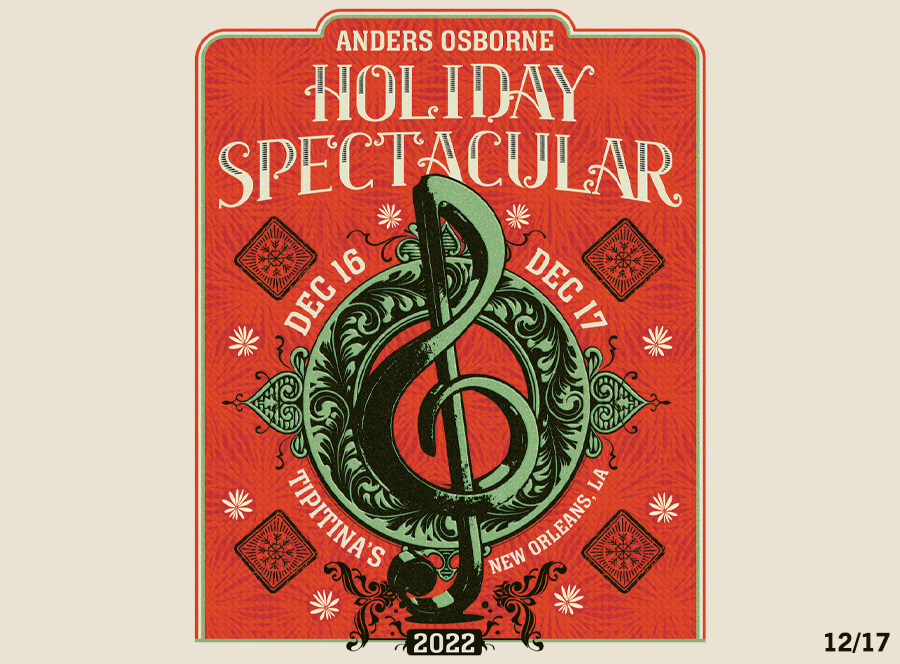 Between the potency of his richly detailed songwriting, his intensely emotional, soulful vocals and his piercing, expert guitar work, New Orleans’ Anders Osborne is a true musical treasure. He is among the most original and visionary musicians writing and performing today. Guitar Player calls him “the poet laureate of Louisiana’s fertile roots music scene.” New Orleans' Gambit Weekly has honored Osborne as the Entertainer Of The Year. OffBeat named him the Crescent City’s Best Guitarist for the third year in a row, and the Best Songwriter for the second straight year. Osborne also won Song Of The Year for his composition, Louisiana Gold.

"I love the way this record comes out stout and determined right out the gate, a four-piece rock & roll band making beautiful and conquering noise," says Osborne.   "The producer, Mark Howard, has a way of making you play in the moment and being confident.  His sounds and engineering style is that of classic records, with his own special sauce of 'haunting' on top of it.  The musicians on here are undoubtedly some of my absolute favorites in the world, both as players and as people. Their contributions are invaluable.  Scott Metzger, Brady Blade, Carl Dufrene, Chad Cromwell, Marc Broussard, David LaBruyere, Rob McNelley & Justin Tocket. Bad boys!  I've been wanting to make this record for several years and I am stoked it's finally here."

A powerful live performer, the musician has won over fans through non-stop touring as well as a heralded collaboration with the North Mississippi Allstars & Southern Soul Assembly.

Jambands.com said, "Osborne finds a striking balance of muscle and grace that allows for the smaller moments of quiet to be just as resounding as the sonic booms."  And USA Today has praised his music, saying "The relentless approach amplifies the anguished lyrics, which appear to be about the death of a loved one or a relationship torn asunder or perhaps a spiritual crisis."  In a review of Spacedust & Ocean Views, Boulder Weekly said the album "finds the guitarist in a (largely) reflective mood, an extended meditation on place and moments in time, memory, passages through and exits from paragraphs in the non-fiction docudrama of life.  Through languid, gently formed figures, Osborne coaxes odes of gratitude and compelling imagery in what seems a little like a travelogue — like watching his kid chasing seabirds on the beach..."

Osborne has earned hordes of new fans. He has toured virtually non-stop, either with his own band, as a solo artist, or as a guest with his countless musical admirers, including Toots and The Maytals, Stanton Moore, Derek Trucks, Warren Haynes, Keb Mo, The Grateful Dead’s Phil Lesh, Jackie Greene and Karl Denson’s Tiny Universe. He’s produced and played on critically acclaimed albums by Tab Benoit, Johnny Sansone and Mike Zito.

Since his recording debut in 1989, Osborne has written virtually all of his own material and contributed memorable songs to a wide variety of artists. Two tunes co-written by Osborne appear on Keb Mo’s Grammy-winning 1999 release Slow Down. Country superstar Tim McGraw scored a #1 hit with Anders’ song Watch The Wind Blow By. Osborne’s compositions have been covered by artists as diverse as Brad Paisley, Tab Benoit, Jonny Lang, Edwin McCain, Sam Bush, Trombone Shorty and Aaron Neville and Kim Carnes. His songs have appeared in multiple feature films. He can also be seen performing in an episode of HBO’s New Orleans-based drama, Treme.

George Porter Jr. founded The Meters in 1965 alongside Art Neville, Leo Nocentelli and Joseph Zigaboo Modeliste. Known as one of the progenitors of funk with Sly & The Family Stone and Parliament Funkadelic, The Meters carved their own place in history with syncopated polyrhythms and grooves inherited from New Orleans’ deep African musical roots. Porter’s heavy pockets and fat notes created the rubbery bass lines behind anthems like “Cissy Strut” off the group’s self-titled 1969 debut — The Meters’ greatest commercial single that reached No. 4 on the R&B chart and No. 23 on the Billboard Hot 100.

The Meters became the house band for Allen Toussaint’s recording label and studio in New Orleans, backing records for Dr. John, Paul McCartney, Lee Dorsey, Earl King, Robert Palmer and Patty Labelle’s No. 1 hit, “Lady Marmalade”. They toured with the Rolling Stones and influenced everyone from Led Zeppelin and Bob Marley to the Red Hot Chili Peppers and the Beastie Boys. Porter’s rhythmic work with drummer Modeliste became the building block behind scores from hip-hop artists A Tribe Called Quest, Run DMC, N.W.A. and Queen Latifah, all of whom sampled The Meters.

The band broke up in 1977, after Toussaint claimed rights to the name, but reformed in the 1980s as the Funky Meters following an informal jam during the New Orleans Jazz & Heritage Festival. Porter went on to become a highly coveted session bassist. He notched studio sessions with David Byrne, Jimmy Buffet, Tori Amos and Taj Mahal; and live performances with John Scofield, Warren Haynes, members of the Grateful Dead and countless others.

Porter started his own long-term project, the Runnin’ Pardners, in 1990. The group’s studio releases include Funk This (2000) and Can’t Beat the Funk (2011), as well as live albums along the way. The current lineup features drummer Terrence “Groove Guardian” Houston, Michael Lemmler on keyboards and guitarist Chris Adkins.

In 2000, the original Meters lineup reunited for a one-night stand at the Warfield in San Francisco, and again in 2006 to headline Jazzfest in the wake of Katrina. The group sporadically performed as The Original Meters to elated crowds between 2012 and 2017. Art “Poppa Funk” Neville retired from performing in 2018 and passed away the following year. But the Meters’ music and their heritage of funk lives on in George Porter and his bandmates – past, present and future.

Born and raised in the Crescent City, Porter, now in his 70s, calls New Orleans home to this day.
Maggie Koerner
Brad Walker & The Hornstars

Brad Walker is one of the most active and sought-after performers in the city of New Orleans. Perhaps best known for his “soaring” (Rolling Stone), “energetic” (NPR), and “tasteful” (Relix) solos on Saturday Night Live, the Grammys, and the Tonight Show with Nashville mega-star Sturgill Simpson, Brad Walker is an active and compelling artist in his own right, with five full-length releases under his own name and a decade of music- making in the Crescent City under his belt. His 2014 debut, ‘Quintet’, received a 4-**** review in DownBeat magazine, and his playing has received praise in Variety, OffBeat Magazine, Gambit Weekly, Dig!, and many others.

In 2019/2020, Walker was nominated for two ‘Best of the Beat’ Awards (OffBeat Magazine), in the ‘Contemporary Jazz’ category as ‘Best Artist’ and for ‘Best Record’, alongside such international stars as Nicholas Payton, Jon Batiste, Herlin Riley, Christian Scott, and Terence Blanchard. He was also nominated by the ‘Big Easy Awards’ (Gambit Magazine) for ‘Best Contemporary Jazz Artist’. These two award ceremonies are considered among the highest achievements in the New Orleans music community.

Dave Jordan is a New Orleans based singer/songwriter/bassist and guitar player. Over the course of nearly 20 years and 3 bands, he has produced or co-produced 6 albums, played nearly 2000 shows nationwide and performed or recorded with some of the most esteemed musicians in New Orleans and across the country; including recording with Art Neville, Anders Osborne, Joe Krown, Bill Summers and more; and performances with such bands as the Meters, Little Feat, Widespread Panic, Bob Weir's RatDog, Los Lobos and many more. His work as founder and frontman of the long running funk/roots band, Juice, landed the band a Best of the Beat award for Best Emerging Funk/Soul/R&B Band and nominations for Best Roots Rock Band and  Best Roots Rock Album  for 2000's Anders Osborne produced, All Lit Up. His song  Biggest Little Shrimp In Town- the title track of an award winning short film- was re-recorded by Art Neville and the Beverly Hills Short Film Festival created an award for Best Song to recognize their collaboration. His most recent work, as a solo artist, has quickly become one of the most talked about roots rock acts in New Orleans and his critically acclaimed solo debut, These Old Boots, was named a Top 10 Local Release of 2010 by the Times Picayune and nola.com.

After the release of These Old Boots, and without a band, Jordan started a two year, weekly gig at his neighborhood, corner bar, the Banks Street Bar. A rotating group of some of the best roots rock, funk, country and blues musicians in New Orleans would sit in, eventually leading to the formation of his current band, the Neighborhood Improvement Association. Described as "Southern roots rock with Louisiana soul', in just over 3 years the NIA has done multiple performances at the world famous Tipitina's; a monthly residency at the equally esteemed Maple Leaf Bar; San Francisco's Boom Boom Room; French Quarter Festival; LA Seafood Festival; multiple performances at Tab Benoit's Voice of the Wetlands Festival; headlined at New Orleans' esteemed Wednesday At The Square series; the New Orleans Museum of Art; Ogden Museum of Southern Art; as well as regular gigs at such stalwart New Orleans clubs DBA, the Rusty Nail, Le Bon Temps Roule, Rivershack Tavern and many more. Dave has also spent considerable time touring the Gulf Coast, including the Pensacola Beach Songwriter's Festival, as wells branching out as far as New Mexico and Colorado and Washington, DC and New York. The band has shared the bill with Luther Dickinson (North Mississippi All Stars and Black Crowes), funk pioneer Bernie Worrell, Anders Osborne, drivin n cryin, Honey Island Swamp Band, New Orleans Suspects, Raw Oyster Cult and more.

In April 2013, Dave released Bring Back Red Raspberry- his first with the NIA- further blurring the lines of the rootsy Americana of These Old Boots, and the organic, greasy New Orleans funk he plied for 15 years with Juice. Every record has a story and Bring Back Red Raspberry is no exception. Consisting of 12 original songs- all written or co-written by Jordan- it shows Jordan's transformation from funk bass player, to acoustic songsmith, to his rock and roll roots. Recorded at New Orleans Oak Street Studios, it comes across as a sort of Dr. John meets Tom Petty meets John Prine affair. It has been featured in multiple local, regional and national publications, including NPR; as well as various television, radio and internet media sites.

After many fits, starts and delays with funding, Jordan turned to kickstarter and raised over $12,000 to complete the album. The support from his national fanbase, but particularly his friends and fans in south Louisiana was tremendous, as only 20% of kickstarter music projects with that level of funding goals are successful.