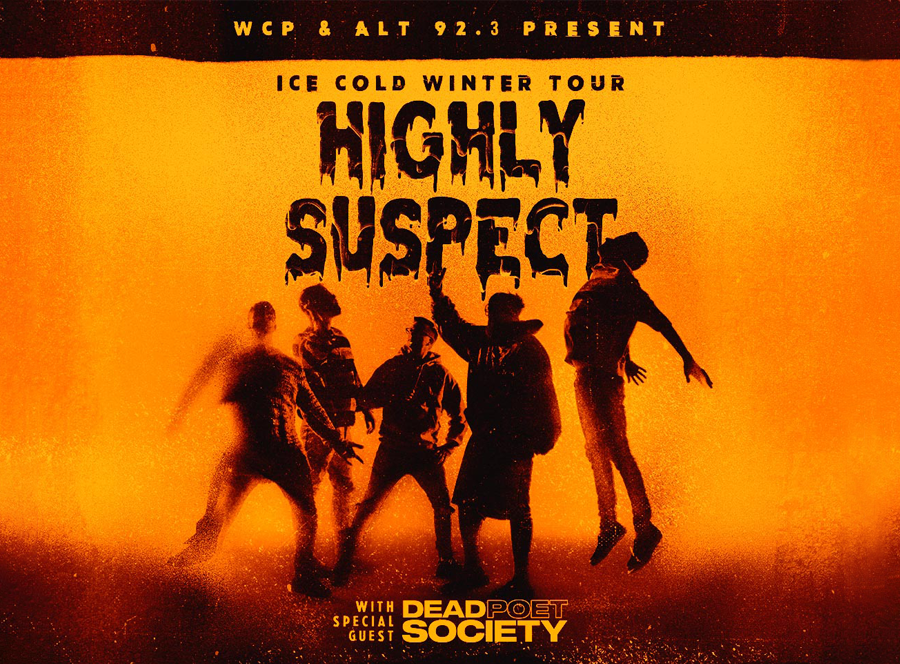 After grinding it out as an underground curiosity, they scraped a path to mainstream infamousness with their 2015 full-length debut, Mister Asylum. It earned a GRAMMY® Award nomination in the category of “Best Rock Album” as the single “Lydia” received a nomination for “Best Rock Song” was certified gold by the RIAA. The 2016 follow-up The Boy Who Died Wolf roared to life with the gold-selling “My Name Is Human,” which catapulted to #1 on the Billboard Mainstream Rock Chart and garnered a GRAMMY® Nomination for “Best Rock Song.” 2019’s MCID affirmed them as the rare outfit who could collaborate with Young Thug and Gojira on the same album. Loudwire hailed the latter among the “50 Best Rock Albums of 2019.”  With hundreds of millions of streams and sold out shows on multiple continents, Highly Suspect charge ahead of the pack again on 2022’s The Midnight Demon Club with no compromises and no apologies as they challenge rock to be dangerous and maybe even life-changing again.

"Our former bass player actually took a soldering iron and soldered the frets off," he recalls. "You couldn't play it normally at all. I thought it was going to be a great idea. Years later it was sitting in my closet, and I decided to pick it up again because I got really bored. It became the new way for us to write music — it opened up a door into this whole new world we discovered."

"It was like, 'This is the guitar,' he adds. "It's like taking something broken and creating art out of it."

With its wonky intonation, the instrument can't produce traditional chords or scales — an unlikely choice for a rock band with such strong commercial potential. Collins and frontman Jack Underkofler are a factory of hooky riffs, even at their most detuned and menacing; and the latter barks and coos with a crystalline purity that recalls Jeff Buckley and Muse's Matt Bellamy.

That contrast is crucial to the band's debut LP, -!- out March 12, 2021 via Spinefarm Records. Take the bruising belter "Been Here Before," which pairs a stadium-sized chorus with angular guitars and Dylan Brenner’s blown-out fuzz bass; "I Never Loved Myself Like I Loved You" opens with the fidelity of an iPhone demo before blooming into a cinematic dream-pop singalong anchored by Will Goodroad's rim-click drum groove. Brenner is a new addition to the lineup, but his experience as the band’s touring stand-in for the duration of their career has made him a natural fit.

It's no surprise that Dead Poet Society like screwing with rock conventions — that's been their aim since forming in 2013 as students at Boston's Berklee College of Music. Hilariously, at least in retrospect, it did take them a bit to find common ground.

"My best friend drummed for them, and I convinced him to leave the band," Underkofler says with a laugh. "Six months later, Jack asked me to sing on a couple songs they'd written. My apprehension came from the fact that they were kind of a meme for being one of the worst bands at school. I kind of tried to push away — our old bassist just kept asking me, 'Do you want to write with us?' One day he showed up on my door step and I was like, 'Fuck.' After I wrote my first song with them ["145"], I was like, 'I think there's something here.'"

The newly solidified quartet quickly developed a chemistry: Underkofler and Collins had a mutual love of Coldplay, but their tastes sprawled over time along with drummer Will Goodroad: heavy acts like Royal Blood and Led Zeppelin, modern art-pop artists like St. Vincent, even hip-hop experimentalists like Tyler, the Creator. Not all of those influences are detectable on the largely self-produced -!-, which features a handful of tracks co-helmed by studio veteran Alex Newport. But that eclecticism makes sense, given their distaste for most modern rock.

"It's just lame," Collins says. "It has been for like 10 years. I think that's because people are paying too much umbrage to classic rock — there's this 'passing of the torch' thing that I think is just bullshit. Heavy music is the way we communicate — it happens to be rock music, but the expression itself and what we're trying to say and how we want to make people feel is unique. That's what bands used to do, and I think that's what a lot of hip-hop artists do nowadays."

"Our goal," he emphasizes, "is to make someone feel something they haven't felt before."