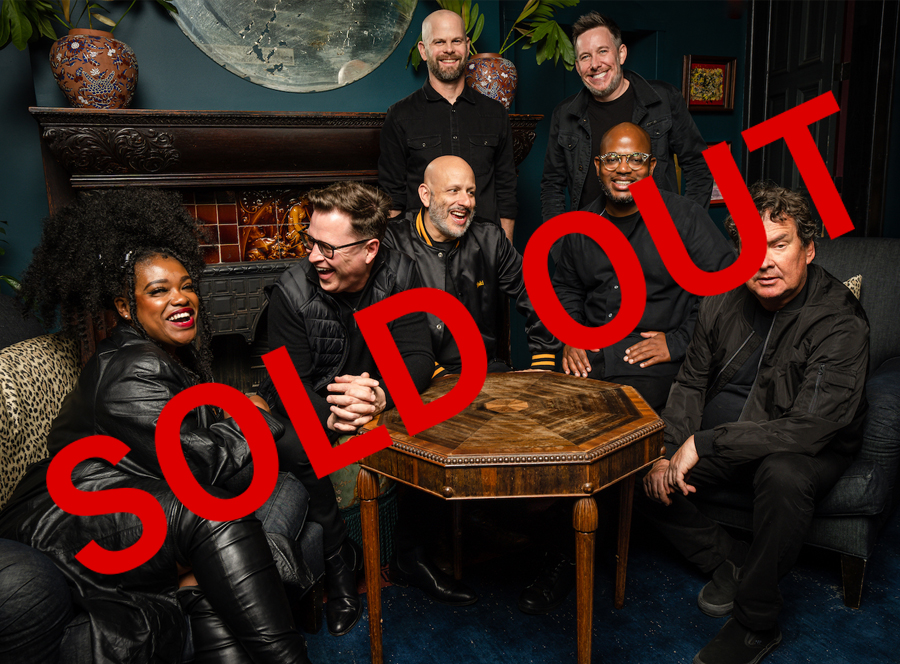 $50.00
Tickets
Galactic
History doesn’t stand still. It impacts, influences, and inspires the ebb and flow of the future by informing the present. Galactic draw on 25 years together in order to progress with each performance and subsequent record. After 10 albums, over 2,000 gigs, and tens of millions of streams, the proud New Orleans, LA quintet—Ben Ellman [saxophone, harmonica], Robert Mercurio [bass], Stanton Moore [drums, percussion], Jeffrey Raines [guitar], and Richard Vogal [keyboards]—have kept the torch burning through five U.S. presidential regimes, the turn-of-the-century, Hurricane Katrina, a Global Pandemic, and a much-anticipated recovery. They’re the rare collective who can support Juvenile on Jimmy Kimmel LIVE!, contribute music to a blockbuster soundtrack such as Now You See Me, and light up the stages of Coachella, Bonnaroo, and New Orleans Jazz & Heritage Festival (a staggering 22 times).

Joined by vocal powerhouse Anjelika “Jelly” Joseph, they continue to forge ahead with a 2021 headline tour and more new music.

“There is a history to the band, yet we continue to release and perform new material,” says Stanton. “I’m truly excited for our fans and audience to hear this next record we’ve been working on. I think it’s some of our best work yet.”

They laid the groundwork for this future upon coming together in 1994. Two years later, the guys dropped their full-length debut, Coolin’ Off, and hopped in a Ford Econoline van (with trailer in tow) for their very first official tour. Along the way, they released seminal albums such as 2007’s From the Corner to the Block, boasting collabs with the likes of Chali 2na, Juvenile, Trombone Shorty, DJ Z-Trip, and Boots Riley. During 2015, Into The Deep marked their first debut in the Top 25 of the Billboard Top 200 and second straight #1 bow on the Billboard Top Contemporary Jazz Albums Chart. Not to mention, it boasted the title track “Into The Deep” [feat. Macy Gray], racking up nearly 20 million streams and counting. Along the way, they performed alongside the likes of Dave Matthews Band, The Roots, Jack Johnson, Talib Kweli, the Allman Brothers Band, Widespread Panic, B.B. King, Counting Crows, James Brown, and many more.  They’ve also recorded and performed with the likes of Allen Toussaint [“Bacchus”] and Big Freedia “Double It”]. Most recently, 2019’s Already Ready Already garnered acclaim from New York Times, NPR Weekend Edition, Exclaim!, and many more, while they’ve appeared on the covers of Downbeat and Relix Magazine.

Around the same time, they welcomed Jelly to the fold after joining forces on stage for a handful of unforgettable performances.

“I was super nervous at first, because I had some pretty big shoes to fill—but like those other singers I had to bring myself and I think I’ve fit in pretty well,” Jelly smiles.

“Jelly came to Fuji Rock in Japan with us to sing background with Macy Gray,” recalls Stanton. “We needed someone to sing one of our Galactic originals, and she stepped up. Since there was no time for rehearsal or soundcheck, she showed up prepared, knew the tune completely, and rocked it. When it came time to find someone new to sing with us, she was our first choice. She has such effortless stage presence and a very comfortable rapport with audiences. She also brings an element of unbridled fun!”

That fun came across loud and clear on the 2020 single “Float.” Uplifted by Jelly’s powerhouse pipes, it hinted at the potential of their collective chemistry.

“I love listening to Galactic’s older records, because they were very funk driven,” Jelly goes on. “Now, it seems like they’re incorporating more pop, rock, and soul to create a newer sound.”

As they continue writing, recording, and performing, Galactic always keep New Orleans close to their hearts at all times. In 2018, the band purchased and took over one of the city’s most hallowed venues—Tipitina’s Nightclub. Their history with the venue even predated the band as Ben’s first job was as a cook in the old kitchen, while they’ve graced its stage more than 100 times over the years.

In the end, Galactic keep moving forward as they add more chapters to their incredible history.

“We’ve just achieved 25 years as a band of brothers, so we know how to work with each other and move ourselves through the next 25 years,” Robert leaves off. “We’re always trying to push ourselves with our songwriting and studio collaborations. I look forward to where the future will take us.”
Anjelika "Jelly" Joseph
Eddie 9V
All his life, Eddie 9V (9-volt) has acted on instinct. Aged just 15, this old-soul artist turned away from the path of college and jobs to burst all guns blazing onto the roots and blues club circuit of his native Atlanta, Georgia. Flash forward to 2019, and for his debut album, Left My Soul In Memphis, the prodigious multi-instrumentalist simply powered up the amps in his mobile trailer and with his brother/co-writer/producer, Lane Kelly, laid down one of the year’s breakout releases, acclaimed as “fresh and life-affirming” by Rock & Blues Muse. “Memphis was a total side project,” shrugs Eddie, “that ended up taking off.”

Now, released in 2021 on Ruf Records, Little Black Flies is the 25-year-old’s most impulsive move to date. Tracked live in Atlanta’s Echo Deco Studios through November 2020, once again with Lane turning the knobs, plus a who’s who of the state’s best musicians, it’s an album that Eddie planned to feel like it’s unfolding right in front of you – right down to the clink of bottles and loose studio banter. “I’ve seen a trend in modern recording,” he says. “There’s no soul. I took inspiration from Albert Collins, Otis Rush, Mike Bloomfield. All those great records were done live with their buddies and no overdubs. I wanted the playing to be spot-on – but even if we made a mistake, we kept going.”

Little Black Flies represents a passing of the baton to a bandleader that many credit for reinvigorating the South’s proud roots scene. Born in June 1996, to a non-musical family living ten miles south of Atlanta, Eddie still remembers his fateful first guitar. “I was six and it was one of those with the speaker in it – get the most bang for your buck, y’know?” he muses. While manufactured pop dominated the airwaves as he came up at Union Grove High School in nearby McDonough, Eddie forked hard left, hanging with Lane and his friends, and digging back into the catalogues of blues giants like Al Green, Muddy Waters, Howlin’ Wolf, Freddie King and Percy Sledge. “I studied the older cats,” he explains, “saw what made them groove and tick.”

As for his freewheeling lyrics, Eddie credits his home life: “I’ve been making words up on the spot for years – my Uncle Brian taught me how to do that at our family fish fries. How to make people laugh, how to hold an audience’s attention.”

Eddie still recalls the frustration of watching local musicians load into the fabled clubs of Atlanta. “My first heroes were the local legends like Sean Costello, but I was too young to go see them,” he remembers. When he finally made it inside, it was as a performer, learning his craft at the sharp end, and at precocious speed, with early vehicles like covers band The Smokin’ Frogs, and its maturing blues-rock offshoot, The Georgia Flood. “My first step in being a professional musician was learning how to accept failure,” says Eddie. “As a nobody, the music business is a dartboard. You just hope something sticks.”

In 2013 – and before Eddie had even graduated high school – The Georgia Flood represented the Atlanta Blues Society in the International Blues Challenge in Memphis. That band spilled over into the indie-rock group PREACHERVAN, but perhaps the pivotal moment came in 2019, when he adopted the Eddie 9V moniker for his solo work. “There are too many Joe Schmo blues bands,” he reasons. “I was on the road with PREACHERVAN and we were talking like mobsters. We all gave each other names – and mine was Eddie.”

Since that rebirth as Eddie 9V, he’s not only pricked up the ears of the music press (“A huge talent,” wrote Blues Blast, “to be noticed and followed”), but earned a respect on the scene that made it easy to recruit local heroes for the Little Black Flies sessions. “Every player is the best of their craft,” says Eddie of his studio band, “and that’s why I picked ’em. We had the Tedeschi Trucks Band’s bass player Brandon Boone and the icon himself, Cody Matlock, on guitar. Everybody’s mood was so exciting. The energy was there.”

This record catches everything that went down at a session that felt more like a party, as Eddie leads the lineup through nine new songs – plus three classic covers – that retool the soul-blues genre on his own terms, reminding a new generation why this music hits so hard. Horns blast, drums rattle, slide guitars howl and at the heart of it all is Eddie’s stinging guitar and unmistakable vocal, the bandleader thrilling us one minute with his soul-man holler, then spinning story songs like he’s sat on the next barstool. “The title track,” he explains, “was a narrative about me being in love with the girl in the apartment upstairs, who was being abused, and wanting to do something about it. Deep stuff. “3AM In Chicago” is about America’s unfairness between race and income levels, but also wanting to improve on the situation. “Puttin’ The Kids To Bed” was a total ‘let’s hurry this up and get down to business’ song.”

With Little Black Flies, there’s a sense of an artist coming full circle: the kid who once loitered outside the clubs of Atlanta now leading Georgia’s greatest players into the studio. Certainly, these recordings gave much-needed catharsis to the musicians who created them. But perhaps Eddie’s ultimate aim is to pass that spirit on to everyone who hears the record. “It makes my day to please someone after they work all day,” he says. “My job is to make them smile and let the music make them forget – or remember.”
Twitter Instagram
Contact Us